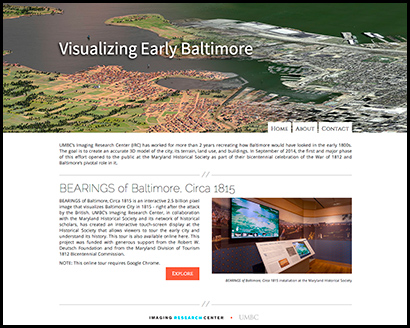 What did Baltimore look like two hundred years ago? What drew early Americans to the city in huge numbers, fueling Baltimore’s growth from a small town into the third largest city in the young United States? Why did the British set their sights on Baltimore after setting fire to the city of Washington in 1814?

The bicentennial of Maryland’s role in the War of 1812 (which mostly took place in 1814) provided a catalyst for asking these historical questions as well as an opportunity for the IRC to use the experience gained from our Visualizing Early Washington, DC project to work on developing an accurate map and 3D depiction of the Baltimore cityscape circa 1815, shortly after the famous bombing of Fort McHenry that inspired the words of the U.S. National Anthem. With fundamental support from the Maryland Historical Society and its network of historical scholars, the IRC was able to collect the data necessary to initiate the visualization.

To create the topography, Joshua Cole, Environmental Data Manager at UMBC's Center for Urban Environmental Research and Education (CUERE), led a group of students and a GIS specialist in the IRC, digitizing historic topographic maps and deducing how the early landscapes of Baltimore and nearby watersheds appeared. The resulting Digital Elevation Model and archival materials will be valuable to historians, hydrologists, and biophysical researchers interested in historical Baltimore. For example, the team discovered that the course of the Jones Falls had already been altered by 1815, straightening out its original meandering oxbow and leveling the high bluffs alongside it. IRC Director Dan Bailey and IRC researcher and artist Tamara Peters then used this information to create an accurate base map of Baltimore at the end of the War of 1812.

With funding from the Robert W. Deutsch Foundation, Tamara Peters spent two years consulting scholars, maps, paintings, photographs, and written descriptions to determine what physical structures would have existed in Baltimore in 1815, and how they would have appeared at that time. Undergraduate interns used that research to create 3D computer models of various row houses, churches, and other landmark buildings that made up the early Baltimore scene.

Funding from the Maryland War of 1812 Bicentennial Commission allowed the IRC to continue to the next stage of this project, producing BEARINGS (Bird's Eye Annotated Representational Image/Navigable Gigapixel Scene) of Baltimore, Circa 1815, an interactive 3D map of Baltimore for the Maryland Historical Society’s exhibit, In Full Glory Reflected, which opened to the public in September 2014. BEARINGS currently exists as a touchscreen kiosk at the MHS and in the IRC, and can also be viewed online at http://earlybaltimore.org (the online version requires the Google Chrome browser to function fully).

The result is a huge gigapixel image of a bird's eye view of early Baltimore. IRC computer programmers have made this scene navigable by touchscreen to zoom into the vast details of the city. Certain hotspots, such as the home of Mary Pickersgill, the seamstress who sewed the famous 'Star Spangled Banner' for Fort McHenry, or the observatory atop of Federal Hill signaling which merchant ships were headed to dock, can be located by tapping thumbnails, and additional information and visuals provided by the Maryland Historical Society can be found by accessing pop-up windows.

In 2016 the IRC created two illustrations of Baltimore for a book commemorating the 200th anniversary of the founding of the Baltimore Gas Electric Company. The first image depicted the entire city and the surrounding countryside as it appeared in 1816 when BGE was first established. The second image illustrated the effect that the first gas lamps had on the city when they were installed by Rembrandt Peale in the neighborhood surrounding the Peale Museum and the Holliday Street Theater.

The topical focus of the project extends beyond the war itself to the status of the fast-growing city of Baltimore at the height of its harbor industries in the beginning of the nineteenth century. With a topography and the foundations of a virtual environment in place, the IRC plans to seek further funding to augment the visualization and develop stories about the early city, to engage audiences with early Baltimore - a young, dynamic, and successful American city.